An Update on our buddy Kayjay 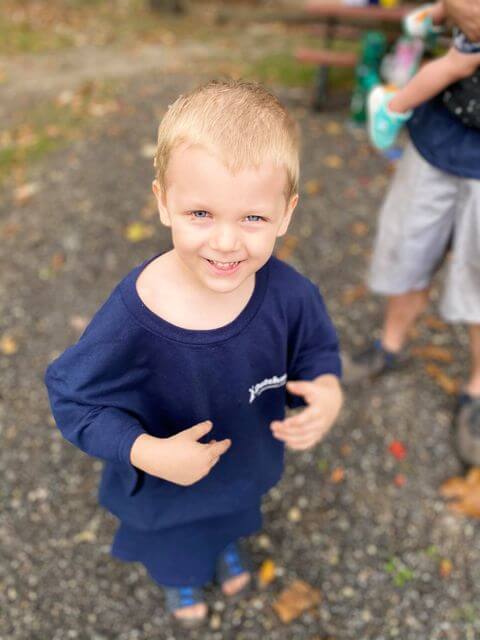 Make-A-Wish Kayjay Update
With the Covid-19 Pandemic Make-A-Wish has been struggling to grant wishes due children’s compromised immune systems. On October 8th of 2020, Dutchmen teamed up with Showalter RV, Global Link, and Make-A-Wish to grant the wish of Kayjay. Kayjay didn’t want a big vacation, he wanted to go camping and fishing with this family.

Kayjay has been dealing with bilateral retinoblastoma, a rare form of eye cancer since he was 18 months old. Lexi, his mother, first noticed something was wrong with her son when she took a picture of him on her cell phone with the flash on, and his right eye was not red like normal but white. Knowing that something was wrong she went into research mode and was able to figure out what wrong before he was formally diagnosed by a doctor at Seattle Children’s Hospital. It was at this time the cancer was discovered in the left eye as well.

Kayjay had to have a port put in his chest and started chemo a week later, but 3-4 months the doctors decided the chemo wasn’t working and decided to administer the chemo to the back of his eyes through a scope in his leg. This method of treatment was finally effective for the left eye and he was cancer free in that eye in November of 2018, but his right was still not responding to treatment. As a last resort and with no more options left, Kayjay had to have his right eye removed in February of 2019.

This procedure allowed Kayjay to be cancer free in his right eye, but his mother now worried about his appearance: “I worried what he would think when he looked in the mirror at himself. But we tried to make the most of it and made as much fun with it as we could. We started calling him Captain Red Eye and got eye patches for him and made the most of it. “

It was shortly after his right eye was removed that the cancer returned to Kayjay’s left eye. It was at this time the family moved to Indiana, and Kayjay was being treated at Riley’s Children’s Hospital in Indianapolis. Lexi felt weak as a mother while her son endured all of the treatments, “I don’t know how his did it. When we would go to the hospital for treatment is was a source of joy. He would light up the hospital wing that we were on. I don’t know how he was able to handle all of this.”

Kayjay has been cancer free for a year since December. After receiving his Aspen Trail travel trailer they went to Spaulding Lake Campground in Niles, Michigan. “It was such a great trip, the owners of the campground recognized us from the local news story and gave us discount,” said Lexi.

“The trailer has been such a blessing for us. It has allowed us to focus on family and just forget about the stress and everything. It has also helped when we have to go down to Riley for appointments we can take it instead of having to stay in a hotel room,” Lexi tells us. The Spaulding Family plans on taking camping trips to Washington and Pennsylvania this summer to visit family. “This gives us peace of mind and allows us to be able to focus on what matters most, family and making memories.”

SHOP AT HOME WITH THE DUTCHMEN TEAM

You're shopping in a new way right now. Contact our team to talk to a factory expert to help you choose the right model based on your needs.